In 2006, his auntie gifted Lorenzo a minibike that she had won on the Italian lottery and from there, accompanied by dad Gregorio, Lorenzo's adventure began! 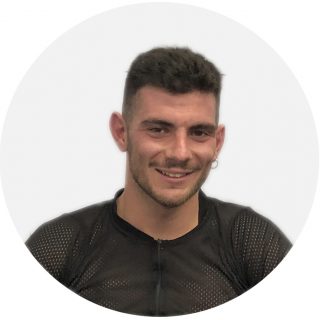 Lorenzo Gabellini was born in Rimini on 8 September 1999.

In 2006, his auntie gifted him a minibike that she had won on the Italian lottery and from there, accompanied by dad Gregorio, Lorenzo’s adventure began!

In 2008, he moved up to the Junior category, and battled for the title all the way through until the final race when a crash compromised the result he was looking for.

In 2010 he finished second in the Honda 50 Mini GP championship and won the European championship at Wittgeborn in Germany, scoring pole position and the win in all three races.

Lorenzo was also selected to participate in the Honda Hirp 50 trophy, in which he achieved four wins out of five, and a second place.

Still in 2010, he took part in the Albacete ‘mondialito’, crossing the line in fourth place just 0.094 of a second behind the winner.

In 2011, and as an official Honda rider, Lorenzo took part in the 70 Mini GP championship, finishing third and becoming European vice-champion in France.

In 2012 he scored second place in the Italian 125 Pre GP championship, finishing just one point behind the winner.

2013 saw Lorenzo moved to the Pre Moto3 category with a prototype bike he rode until mid-season, after which he competed with Moriwaki and finished fourth.

In 2014 he continued his Moto3 journey with some excellent results that saw him selected by Honda to take part as a wildcard in the Pata European Junior Cup at Imola with a CBR 500 R. He fought hard and led the race for most of the way until a crash at the final corner unfortunately kept him off the podium. Lorenzo nevertheless climbed back on the bike and crossed the line ninth.

In 2015, Lorenzo took part in many races, taking part in the Italian CIV championship with Kymko Oral, the Super Motard, as well as wildcard appearances in the Italian Trophy at Pomposa and the Baffo Trophy race at Cervia, both of which he won. 2015 also saw him flirt with Flat Track, where he finished fifth in an Italian championship race.

In 2017 he once again competed in the CIV Supersport 600, becoming an official Yamaha rider. Lorenzo immediately took centre stage, scoring five podiums including one win, and winning the fastest lap award.

That same year saw Lorenzo compete in Italian Flat Track, where he won the championship at the final round!

He was selected to participate in the Superprestigio Dirt Track at Barcelona where he took on the great champions of MotoGP, Moto2, Moto3, MX and Motard.

In 2018, he continued in the Supersport 600 category, earning numerous podiums and one win to finish fourth overall and secure the fastest lap award.

That same year, Gabellini also competed as a wildcard entry in the Supersport 600 World Championship at Misano. Having put together a solid qualifying session, finishing twelfth, the determined Italian rider got into a good rhythm in the race and was fighting for the top ten, improving his position lap after lap before crossing the line in seventh place, first among the wildcard entries, and scoring his first world championship points.

At the end of that season, he took part in the 100km of Champions at Valentino Rossi’s Ranch.

In 2019 Lorenzo won the Italian SSP600 championship, dominating race after race. With eight podiums in twelve races, including five wins and a pole position, he also won the fastest lap award. He also competed as a wildcard in the Misano WSSP 600 round, placing sixth overall and first among the wildcard entries.

For the 2020 WorldSBK season Torres was signed by MIE Racing to partner Takumi Takahashi in the MIE Racing Althea Honda Team starting from Round 2, set to take place in Jerez de la Frontera (Spain) over the weekend of 31 July-2 August 2020.